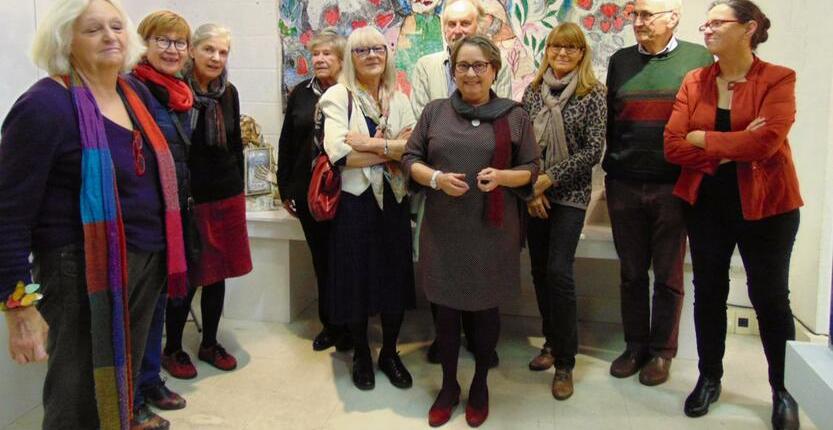 A as “Autoportrait” (self-portrait)

The word officially entered the dictionary in French only around 1950. But it is in the West a practice as old as the painting itself (we find self-portraits among the letters of the psalters and evangelicals from the eleventh century). The genre refers to the portrait of the artist by himself. At the Uffizi Museum in Florence, the collection begun in the seventeenth century by Cardinal Leopold de Medici on the model of the galleries of great men of antiquity is continuously enriched over the centuries. She brings together to date more than a thousand self-portraits.
Often, the artist represents himself at work in the workshop, with his attributes: palette, brushstrokes or mechanical pencils, cane, easel (Rembrandt, É.Vigée Lebrun, Picasso …); or with the emblems of Painting (Poussin-Autoportrait Chanteloup, 1650, Louvre). Sometimes it’s his plastic that personifies him. He presents himself as his work: at the age of 30, Bram Bogart paints his palette and brushes in his hand (Self-portrait with a palette, 1949-1950, oil on canvas, Abraham van den Boogaart, Belgium); forty years later, in the same colors, but pure, his self-portrait is this composition of pigmented paste packets; the artist is his work: Moi, 1989, mixed technique, Coll. Abraham van den Boogaart.

David Boulanger has the audacity to lend his features to the four mythical figures described by Pliny the Elder and cited as an example from the sixteenth century to exalt the excellence of pictorial art: Parrhasios, Protogène, Apelle, Zeuxis; on them is based the figure of the painter. David also represents himself as Courbet À la pipe, by Rembrandt with wide-eyed eyes …
_What nerve ! Does he take himself for these masters?
_But why not show an ambition of excellence?
Perhaps this choice of superimposing one’s image on that of the faces and plastics of the great artists amounts to melting, with humility, into the glaze of painting …
Intense desire to base its own relevance on the permanence of the desire for painting …

I hold you, you hold me …
The resemblance is one of the parameters of the portrait and the self-portrait, genres supposed to restore the appearance – and the character – of the model.
_When David Boulanger offers his Self-portraits in the donkey’s cap, in the hood, in the mask, Alexander the Great, Protogenous, Parrhasios, Apelle, Zeuxis, Bonaparte, Egyptian, in Cyclops … what allows us to recognize him?
The face (shape of the eyes, eyebrows, nose, lips)? Skull ? Body shape ? The posture?

Not only does David endorse the personality of the great painters of antiquity (of whom we have no idea what their figure – and their work – could look like), but, in addition, he wears hats, hoods, masks, green hair, red … There is even a Siamese Self-Portrait, and this other-absurd-a self-portrait without a head!
Then, how could we recognize him without this insolent goatee? So it would be this trait, stuck to the chin of the portrait, that makes the name of the paintings relevant?
Or, are these few hairs, beard hair, sable hair or small gray hair, a sign that it is still painting, nothing but painting?
As if, abandoning the metallic shell of the brush, they had come to stick on the fresh color of the painted figure …
Hair which seems a prosthesis, since posed on the surface of the canvas, they are, in these portraits, the hairs of the painted beard of the painter painted by himself.
Hair (s) to scratch … Affirmation of self in the very time of erasure …
_How to recognize it?
The first of us laughing …

Photography appears in the middle of the 19th century.
Very quickly its popularization as a means of producing faithful images of reality causes the painting to lose the monopoly of the representation (in particular the monopoly of the portrait which is at that time the “pot-au-feu” of the painter).
In fact, painting will be able to overcome the concern for mimesis. The photograph is prodigiously similar, and in the blink of an eye (just press the shutter) it reproduces the reality.
However, until the 1950s, it was in Black and White that photographic images were produced and disseminated. It remains to paint to invest the field of color.
The impressionists, the big cats compose by the color. Matisse cuts out his figures in color (gouache papers). The painting becomes a color field (Rothko, “color field”) and perhaps also a battlefield of color (Pollock). The painting is color; with Yves Klein IKB 75, the color becomes the work.

David Boulanger operates a gap that seems a return: his paintings take on the appearance of the Dutch monochrome. In the seventeenth century the Dutch called “banquet monochrome1” these “silent lives” (still lifes) close to the “vanity”, where the spiritual emanates from the representation of the material (Pieter Claesz Still life with the candle 1627, Willem Claesz Heda Still life tobacco 1637).

In most of his works, David restricts his range to earth tones.
_Why is there such a constraint? Perhaps so that the rigor of the construction and the smoothness of the passages, that this economy requires, lead the spectator to appreciate how the painter models with the light …
But this asceticism that is his, perhaps it also proceeds of a ploy – a politeness – to lead us, finally, to look at painting …

The first portraits of Rembrandt by himself (1627-1629), painted or engraved (nowadays designated as “self-portraits”), were initially, according to Quentin Buvelot2 Trones.
Tronies is a Dutch word derived from the ancient French Trogne: grotesque head intended to make laugh, n.f. , 1580 trongna trongna Gallic word meaning “false appearance”. The Tronies designate, in the Netherlands of the seventeenth century, the representation of a certain type of characters (young woman, old man, soldier, oriental king …). Rembrandt used his own face as a model for face studies, tracings (as the result of etchings made in 1630). The study of emotions and feelings expressed by these faces was then used for historical representations of subjects drawn from the Bible (Old and New Testament) and the epics of Antiquity. Thus the painter took place in a hierarchy of arts endorsed at that time and for at least three centuries …
Here, what emotions are these enigmatic faces painted by David Boulanger?
For what epic, for what drama? (Latin drama, Greek word “action”).
_What action meditates this sequence of strange characters? From the exemplary gallery of illustrious ancestors to this burlesque theory of hybrid figures, what is the meaning of such an assembly of trognes? What stakes is this immobile procession the manifestation? Who’s watching who?
Perhaps it is up to us, spectators, to discover it … Perhaps, like a freeze frame, David Boulanger is a mirror to the worries, mutations, aberrations, antics of our time …
On the surface of the mirror-image, or slightly withdrawn, caught in the glacis that fascinates and holds at a distance, here is the reflection-figure of the representation: impalpable, but present, implacable. As for David, he repeats: “All this is only painting! ”

Célia Ivoy-Lefrançois is responsible for cultural development in the city of Évreux, director of the contemporary art gallery La Cave d’Arts in Louviers and director of the Atelier d’A art center – Espace Hubert-Lefrançois (ALCA) in Gravigny.

At the crossroads of aesthetics, ALCA offers singular artistic paths and inserted into regional, national and international programming : Normandy Impressionist Festival, Month of Contemporary Architecture, European Heritage Days, Retrospective of the painter Gerard Fromanger, Years of China and from Brazil … Its activities have been developing since 2011, at Atelier d’A – Espace Hubert Lefrançois, which was an architect’s studio: exhibitions, shows, workshops, conferences.
Between 2003 and 2018: 15 years = 105 artists, 56 exhibitions, 25 concerts and shows, 20 conferences, round tables. Facebook